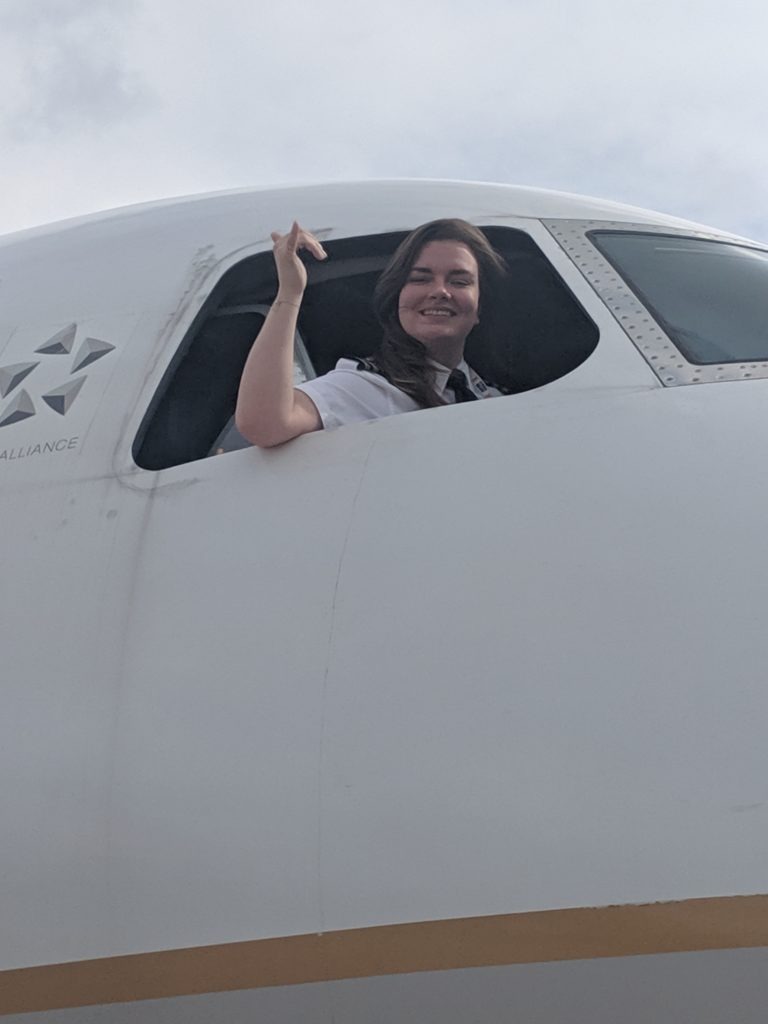 Where are They Now? Maggie Kirscher, Private Pilot

2022 marks PAFE’s 20th anniversary, and to celebrate, we will share a story each month to honor the teachers and students who are making a difference thanks to your donations.

In a conversation with Maggie Kirscher, SHS Class of 2012, we continued our exploration of the long-term impacts of PAFE programs and grants. Maggie, a career pilot for NetJets, the world’s largest private aviation company, draws a clear line back through her journey in professional aviation to her guidance counselor, Jeralyn Mire.  Jeralyn’s position was originally funded by a PAFE grant and proved to be so valuable that LPOSD included a post-secondary transition counselor in the district’s budget when the grant ended.

In middle school, Maggie Kirscher found her “calling” during a front seat flight from Coeur D’alene to Boise in her friend’s parent’s private plane.

“It was incredible. I knew I wanted to pursue [flying] from that point on, but I had no idea how. My parents weren’t pilots, and I didn’t know any pilots. You know, it was just a kind of pipe dream. But I knew I wanted to do it.”

Becoming a pilot isn’t an easy or obvious choice for most students, meaning the path to get there wasn’t as apparent as the traditional college-to-career trajectory. Maggie, eager to make her pipe dream a reality, didn’t know where to start. That is, until her sophomore year, when she met with her guidance counselor, Jeralyn Mire.

“[My teacher and] Jeralyn made sure that every student in class had an opportunity to have a job shadow with the career they wanted. And mine was a pilot, so she got me set up at our local airport with an instructor named Ken.”

The job shadow experience not only affirmed her interest in aviation but laid the practical groundwork for making such a career happen. Maggie shared,

“We flew around the Sandpoint area, and Ken taught me the basics of flying, and he even let me move the controls. Then, we talked about my future and how to make it happen. From that point, Ken and Jeralyn were like my team helping me get where I wanted to go.”

After her job shadow experience, Jeralyn helped Maggie explore the different possibilities open to her –from military positions in the Air Force and Navy to aviation colleges for non-military pilotry.

“I went through every single route with Jeralyn. She helped me think in a smart way, like how to apply and get accepted. I just remember feeling so stressed sometimes I would barge into her office,  and she was a constant source of support. ‘Okay, we’re going to get through this. We’re going to figure this out [together].’”

Maggie’s career took shape after graduating in 2012, playing basketball for NIC and covering her general education credits before heading to a two-year program at a community college in Douglas, Arizona. She worked to reach all of her aviation ratings and specialized training requirements there. She eventually took jobs flying all over the West Coast to bolster her pilot hours and became a pilot for Republic Airlines. Now, living in Indianapolis, Indiana, with her husband and their dogs, and happily positioned at NetJets, Maggie pilots a private plane for people traveling within the Americas–a job that took her to the Caribbean three times during the week we spoke to her.

Reflecting on her time at Sandpoint High School and the impact Jeralyn had on her career, Maggie offered this:

“At that age, most people have no idea what they want to do. And just to have a teacher or a class that maybe puts a little bit of that passion in you is huge. I’m just very grateful for Jeralyn… and I know [most] people in those classes were very grateful to have [such an] opportunity. Because they’re rare.”

Maggie, you are so right. It is rare to have someone like Jeralyn and her counseling team available to guide students and help them realize their dreams. We count ourselves fortunate to have them at Sandpoint High School.

Jeralyn Mire is the Post-secondary Transition Counselor at Sandpoint High School.  She has held this position for the last twelve years.  In 2015, Jeralyn was awarded Counselor of the Year for the state of Idaho and two years ago represented Idaho at the American School Counselor Association’s White House event.