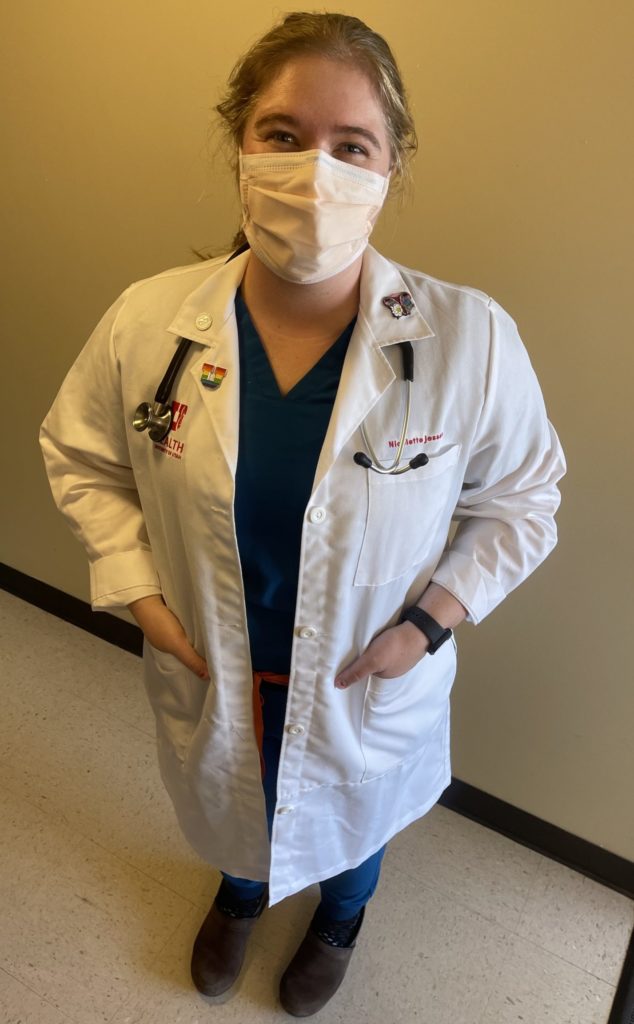 We spoke to Nicolette Jessen, SHS Class of 2013 as part of our quest to understand the long-term impact our grants have on students. Nicolette is a fourth-year med student going into OB-GYN at the University of Utah School of Medicine. She has been touched by several grants during her high school years and she chatted with us one morning shortly after delivering “a couple of babies and doing a C section.”

Since I was five, I wanted to be a baby doctor. People thought maybe I meant a pediatrician but no, I wanted to deliver babies. What planted the seed is that I was born five weeks early and wouldn’t be here today if it weren’t for my mother’s OB-GYN and team.

Knowing what you want to be at such a young age is a blessing and a curse. Of course, Nicolette has to complete her education, do the hours and the training. Meanwhile, she is impatient and just wants to be a doctor. “It’s not far now, I graduate in May of 2022.”

Nicolette had big dreams to go to an excellent pre-med program in California. Jeralyn Mire, whose position originated through a PAFE grant, supported her big ideas when others didn’t think she could do it. “She pushed me,” said Nicolette, “ I applied to schools like Stanford and Pepperdine. She helped me find scholarship programs (thanks to PAFE’s Scholarship Streamline). In the end, Nicolette was accepted into Pepperdine and as a first-generation college student, that was no small feat.

I hit the ground running when I arrived at Pepperdine. I was nervous as can be. Many told me I would likely fail tests in the first year but I put my blinders on and focused. I’m especially thankful for Sandpoint High School and PAFE’s programs because they gave me an advantage. I arrived prepared and ahead of many other students.

Through the National Honor Society (NHS), Nicolette performed her volunteer hours by providing social support at READY! For Kindergarten. “I am really into service so I went above and beyond with my hours. I loved being able to provide a safe, loving environment, even for four hours to some of these kids. You could tell some don’t have as much social support and their parents or grandma are there trying to learn everything they can to get them ready for kindergarten.”

Those volunteer hours for PAFE ended up qualifying Nicolette for a $10,000 service grant to pay for tuition at Pepperdine.

“Anatomy and Physiology with Mrs. Yost, AP Biology with Mr. Barton, and Physics set me up so well for success in my first year of undergrad. The technology that PAFE funded in Mrs. Cessna’s, Mr. Martz’s, and Mrs. Yost’s class was critical to that. I was way ahead of the game compared to my peers. Also, the Collegiate Medical Terminology grant in Kathy Holm’s health occupations program. These programs combined helped me to feel so confident in the knowledge that I had already gained.

“Ultimately the funding PAFE provided SHS from 2009-2013 is one of the reasons I am where I am today. And PAFE along with the teachers at SHS will be on my long list of thank-yous when I become a physician in May 2022.”